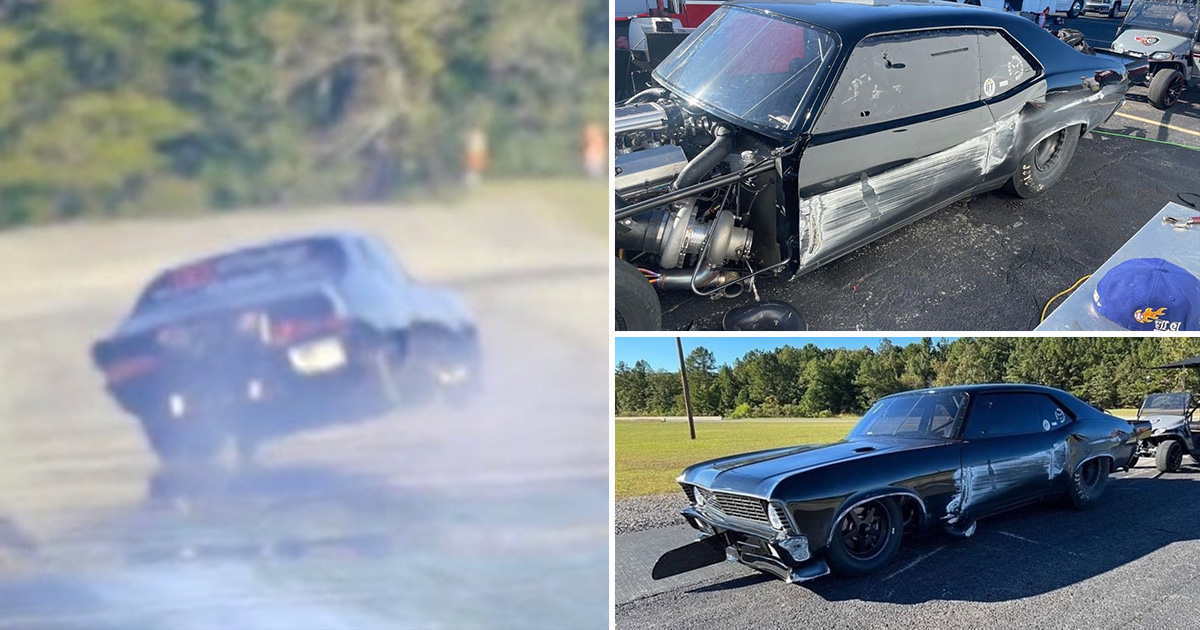 After a recent test pass went awry, it appears as if Street Outlaws and No Prep Kings competitor, M*rder Nova, might be operating with a bit of a racing stripe for a little while.

The law of averages insists that eventually, after making so many passes at such high speeds, a little bit of a tangle with the wall is bound to come sooner or later. As Shawn Ellington has been behind the wheel for quite some time, it just so happens that one of those instances went down recently.

During a pass at Alabama International Dragway, the sinister black Chevrolet Nova would have an oil line blow off which created quite a mess under the car at high speeds. When the car ran over its own oil, it really lost control, violently swerving around the track. Fortunately, Ellington is an experienced driver and did a very good job of avoiding the most major damage. However, the car did get into the wall at the top end of the track and scraped the side quite a bit. Needless to say, if it wasn’t for the effort of the wheelman here, things could’ve gotten a lot worse.

It’s hard to tell for sure without getting an up close and personal look but it appears as if perhaps the car was even safe from any possible mechanical damage.

In the video below, DragCoverage was on the scene and captured the moment on video. At the end of the day, while an incident like this is incredibly unfortunate, it really comes with the territory and we’re sure that a professional like Ellington will make a quick recovery as he has stated that he will be back in action next weekend at Rockingham No Prep Kings. Who knows? He might even have the car repainted by then and 100% back to normal!

« Forgotten Legends: The Story of the Fastest Truck in America That Never Sold Well