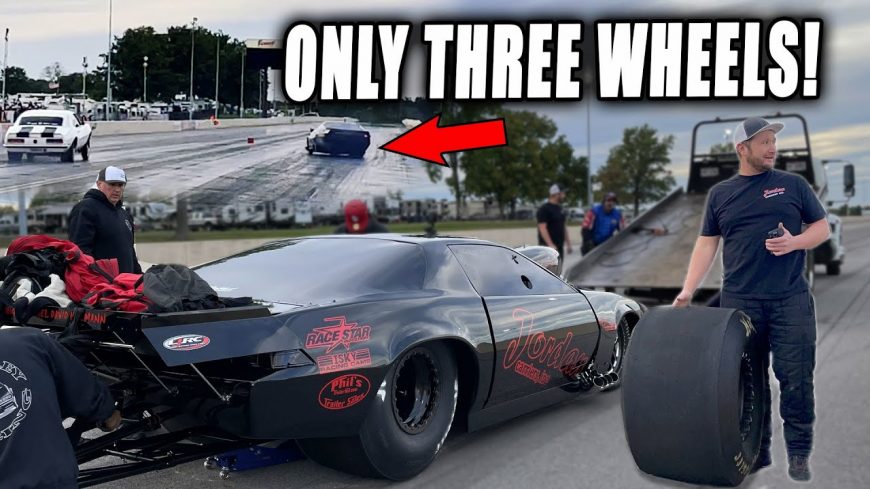 As fans of Street Outlaws competitor, Kye Kelley, likely know, he has been operating behind the wheel of a new car. It might look like he’s riding around in the same old Shocker Chevrolet Camaro but the current version of Shocker out there on the track is a replacement for Kelley’s last car that was involved in a freak accident.

While it seems as if the driver and his team have done a pretty good job dialing the car in so far, it seems like there are a couple of wrinkles left to be ironed out. Apparently, one of those wrinkles came down to tire size which is one of the metrics that Kelley was looking to tinker with at No Prep Kings Ohio.

In a recent vlog video, Kelley would take to the track, throwing on a bigger tire and telling viewers that during the test pass “it’s either going to go or shake.”

What he didn’t expect, though, was that the wheel involved in the swap would become completely dislodged from the car. Right from the get-go, things got ugly on this test pass on Friday before the event really got going. During the pass, the machine would get incredibly out of shape and almost looked like it just lost traction. However, as we dive deeper into the incident, we would learn that Shocker lost a wheel altogether!

Following the pass, the racer would reveal that the center section broke completely out of the driver-side rear wheel. He also made a point of pointing out that these wheels were a borrowed set for testing purposes and weren’t provided by Kelley’s sponsors.

After getting this issue sorted out, we’re sure that the team was raring and ready to get back on track. However, it felt like things could just never get going for Kye Kelley Racing in Ohio as the issues persisted with tire shake and the engine deciding that it wanted to destroy pushrods. In fact, it seems as if the crew was busy chasing down engine issues for the majority of the event.

While some might see successful drivers experiencing success and think everything is all sunshine and rainbows, every team has an event or two like this. We can’t help but have a lot of respect for Kelley for being willing to take fans inside of even the toughest of tribulations out on the track.