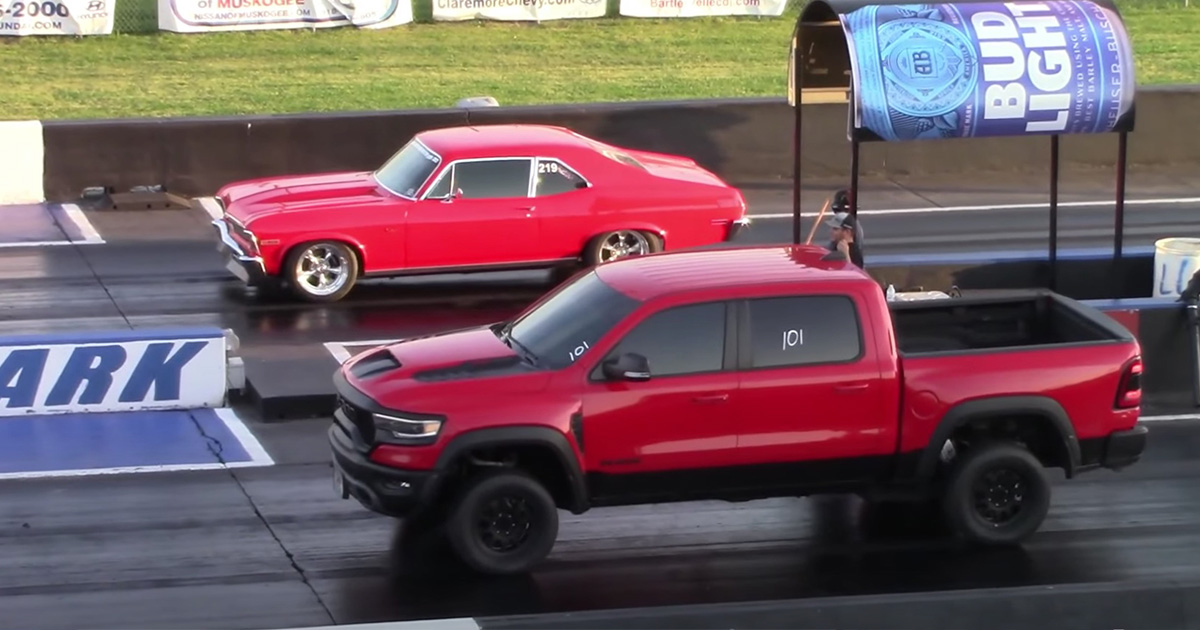 I think that it’s pretty safe to say that back in the 1970s when the Chevrolet Nova ruled the streets, pickup trucks certainly weren’t a part of the performance vehicle equation.

Sure, there might’ve been a modified offshoot here and there but there were certainly no such things as factory performance pickup trucks rolling to the drag strip and showing muscle cars a set of tail lights. Fast forward to 2022, though, and those who venture their way to the strip need to be careful what kind of vehicles they line up against. One absolutely never knows what the vehicle in the next lane over is capable of whether it’s a car, truck, or even a van.

In this particular case, we see just that point made in bold and capital letters.

In one lane, this time, we have a classic with the 1970s Chevy Nova. Now, back in the 70s, one might be able to be pretty fearless rolling up next to a pickup truck in this thing. In 2022, though, nobody is safe.

In the next lane over we have the Ram TRX. For those who missed the memo, these things are packed with 6.2 L supercharged V8 power that might be familiar to anybody who has tinkered around with a Dodge Challenger Hellcat. This thing makes creating extreme power look easy as the truck brings 702 hp to the table along with 650 lb-ft of torque. When all is said and done, the Ram manages to run a 10.9-second quarter mile as compared to Nova’s 11.11-second quarter mile.

Naturally, in a situation like this, it’s pretty clear that both cars have undergone some sort of modification.

For the truck, most visibly, the TRX has slicks on all four corners. Throw in the fact that the truck manages to run a bit faster than the advertised 12.9-second quarter mile and this leads us to believe there are probably at least some bolt-on modifications done to the truck as well. It’s hard to say exactly what is done to the Nova but we would venture to say that the fact that it’s almost a 10-second car means that some tinkering has been done to it as well.

In any case, though, a video like this really just shows us how awesome it is to be a performance pickup truck enthusiast in 2022. We’re not sure that this is a scene that the automotive community ever would’ve thought that they would’ve seen back in the 70s, whether the truck is modified or not!

« Ryan Martin has an Extremely Close Call vs Kye Kelley